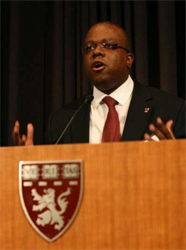 Andre Bisasor is the founder of the Negotiation & Leadership Conference at Harvard University, which has had several years of success and high acclaim. Andre has developed a number of innovative academic-event programs on negotiation, resulting in the production of several ground-breaking conferences at Harvard University. These programs have equipped thousands of participants including international audiences in several countries including Poland, Brazil, Sweden, Germany, Russia, Australia, New Zealand, India, Jamaica, etc. Andre’s work has been featured several times in the local media including NBC’s WHDH/Urban Update in 2010, 2011 and 2012 as well as in the Harvard Gazette and the Harvard Crimson newspapers.

Andre is President of the Harvard Negotiation Alumni Society, a Harvard-wide organization (encompassing all Harvard schools) geared towards developing a world-wide network of Harvard alumni, faculty, scholars, researchers and other professionals in the field of negotiation.

Andre’s professional experience includes work in the venture capital field, where he assisted in negotiating/structuring seed-stage capital for multi-million dollar projects, as well as in strategy consulting for Andersen Consulting, Terrafly (a joint venture between NASA and The National Science Foundation), Dell, Cingular, and AT&T Wireless. Andre also has served as a teacher/tutor to disadvantaged, inner-city, high-school students in the Miami-Dade public school system, as well as a board consultant to non-profit organizations in Jamaica dedicated to transforming the impoverished areas within the inner-city communities of Kingston.

*For more information on the organizing team for the 2012 Negotiation & Leadership Conference, please visit: http://negotiationleadership.org/organizers